I have no idea how or when it got started but I seem to be slipping into it quite involuntarily. In fact, I just realized it today! 😮

Every summer, during which all the fall and spring TV shows goes into hiatus, leaving me with nothing to watch but re-runs and game shows, I would go online and watch the old TV shows and by old, I mean anywhere from the 1930’s to early 2000’s.

Anyway, I think the first show I spent the whole summer crazy over was “I Love Lucy”. This show is crazy ridiculous and funny even though it’s in black and white. It is way funnier than the shows these days especially the episodes when the gang takes a trip to Los Angeles and Ricky put his landlord, Fred, in charge with buying a car. Then Fred came back with an old junk that fell apart even before it hits the road.

This is right before the car falls apart!

This part kind of reminded me of my own car because the timing-belt broke within one-week of purchase. I laughed so hard at that, the show, not my car, that I cried when I got the bill. 😦 I still love this show and re-watch it occasionally on my tablet because I guess I got the history junkie gene from my mom or something since my mom also watch educational history show. Me, on the other hand, just want to get a glimpse of  the 20th century life like 1950’s America. I gotta say, it is a lot more technological advanced than I’ve imagined. I mean electric razor, television? Really??? I was still watching a boxed TV in the 1990’s!

Anyway, from there, I watched just every Tom and Jerry shorts (except the ones made in Czech, boring), most of the Mickey Mouse, Donald Duck, and Goofy shorts. I mostly watched the Donald Duck war cartoon though since WWII is also an interesting era in history.

Then last summer, right after my leg surgery, which left me lying on the bed bored out of my mind, I watched every episode of The Vampire Diaries, and Sabrina, the Teenage Witch, 90’s version.

I remember watching Sabrina when I first came to the U.S. but I didn’t understand English and as I began to understand, they stopped the show and all the re-runs. So watching it again on Hulu brought back so much memories. It is also a very very funny sitcom. I especially like Salem the talking cat. I wish I have a pet like him, not only is he cute but he talks! Really cuts out all the work to have to figure out what your pet wants. 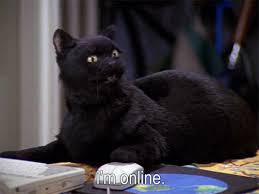 I know it’s the most crazy thing you’ve ever heard but hey, it’s much better than doing nothing. Really cures boredom, I might add and might be educational? It used to be on Hulu plus but it recently changed to free. Yay! Anyway, I just started watching it, it’s in color, by the way, and so far, I’ve been laughing my head off. It is way way funnier than The Lucy Show which I watched last winter. In this sitcom, Lucy is accompanied by her teenage children and the situations they get into is way hairier than the situations Lucy gets herself into in the old days. I strongly recommend you check it out too.

Call me old-fashion and nerdy but I really have a curiosity of the life in the old days. The show I absolutely want to watch though is The Little Rascals. It is another all-time classic. It really gives you a glimpse of 20’s and 30’s America. I watched it in high school (the last day of school, nothing to do) and I laughed so hard with my biology teacher. I want to watch it again but unfortunately I searched the entire world wide web and cannot find it. 😦

Anyway this is the crazy annual summer tradition I want to tell everyone about. Lame, right? Or Cool?! 😮

Do you have any summer rituals or traditions that you just unconsciously slip into every year?