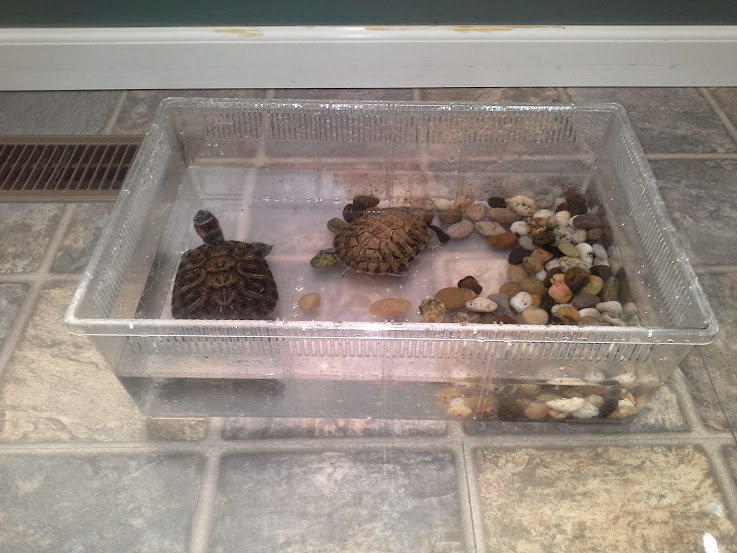 When my “rich friend” had asked me to “take care” of them last month, I knew it wasn’t temporary. My mom had asked her if it will be okay to ship them back to California along with the car. Well early yesterday morning at 7-something, the shipping company finally came to pick up the car and when I asked him if he could take the turtle too, he said no.

He told me anything alive would not pass inspection when entering California. So I’m stuck with these guys until who knows when. My “rich friend” had called me shortly after and I told her the driver would not take her turtle. She had said, “That’s okay.”

Well, that’s easy for you to say. I would have to take care of it and I still know nothing about turtles. I googled how to take care of aquatic turtle and all the results only pointed to how turtles survive in the ocean. Is my friend the only person raising turtle?

Anyway, I have no clue how much to feed them so at the moment, I’m just giving them pellets twice a day and a protein treatment whenever they’re restless. I’m just trying to keep them alive until my friend comes back. I just hope I don’t kill it but I think if I do, I’d be doing these guys a favor because they seem miserable stuck in that tank all day. If my friend asks, I might tell her, “Everyone makes mistake.” But I will try not to kill them in the meantime. 😉