I can hardly believe it. Thanksgiving has come and gone this year and Christmas is coming in a month and 2016 in less than 5 weeks! This year feels like it’s just breezed by. It was just 12 weeks ago that I began school and now, I’m two weeks away from finals.

I am procrastinating at the moment. I have three papers to write and yet, I am here writing this post because I’m struggling. That’s what the holiday does to my brain. It makes it go into hibernation. I’ve noticed my writing has suffered because of it because readers only giving me four out of five stars on my posts.

Meanwhile, this was the view from this morning. It’s snowing again and I saw it as a chance to test my new camera. Mom couldn’t believe the new camera managed to capture the sun.

This Thanksgiving was excellent and quiet. We were invited by mom’s friend to a buffet-style Thanksgiving meal. Everything was home-made, except for the pumpkin pie that we brought, and everything was delicious. We arrived early and at first, I thought I’ve arrived to my worst nightmare because it turned out the friend has three cats and two dogs. I’m afraid of dogs and cats, okay? 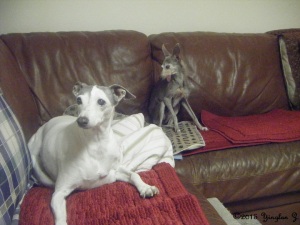 …two dogs doing their own things

It turned out the dogs were old and well-trained. “How old are they?” Mom asked curiously.

“They are both 15-year-old.” The hostess replied.

The gray scrawny dog was shaking, probably from the cold and it was partly blind due to cataract in one eye. I could see it. One eye is red while the other eye is cloudy and gray, just like some one with cataract. Knowing this, I began to feel safer but at the same time, I felt sorry for the poor fellow.

After having a brief conversation with mom, the hostess seemed to sense my boredom and quickly turned on the TV. She went to the menu and searched for a English-speaking movie. The movie of her choosing was “The 33”, a true story about the 33 miners trapped in a Chilean mine.

As the movie began to play, the hostess returned to the kitchen to help her daughter with the meal, leaving mom and I to enjoy the movie. I could tell mom was enjoying the Chinese subtitles, me, not so much. I still prefer English.

“Okay, time to eat.” The hostess announced and paused the movie, drawing our attention to the feast displayed on the table by the door.

After finishing my first plate, it was turkey time and knowing my clumsiness, mom came to my assistance. Expertly, she sliced the thigh of the turkey and piled some nice dark meat onto my plate. With a drizzle of turkey gravy, the turkey was perfectly cooked and delicious.

By the third plate, I was full and decided to just settle with a plate of fruit and a chocolate chip cookie. Then I just sat and waited for confirmation of what to do next. Are we going home? Finish the movie? I tried to give mom a signal but it didn’t look like she knew either but after the fastest after-meal-clean-up-ever, the hostess decided to resume the movie.

As the movie came to an end though, mom’s other friend who also happens to be the hostess’s friend, showed up. The two of them began talking while the rest of us, me, the hostess’s daughter and the boarder, watched the movie. After the movie ended, the hostess’s daughter took control to pick another movie. She asked what I wanted to watch but honestly, I have watched almost zero movie during the past year and had no idea what any of the movie she showed me were. “Anything’s fine as long as it’s not horror.” I said.

After browsing several pages of movie directory, she settled with “The Imitation Game”. It’s a fascinating movie. Very well produced.

We left after the movie ended. Night had already completely descended and the wind was getting stronger as we tried to find our way back to the car. I began to regret not charging my phone. It was scary, I must admit, knowing I could walk into something at any moment and the howling of the wind was making the hair at the back of my neck stand up but I made it back to the car. Together, we braced the wind and made our way back home.

Overall, this Thanksgiving was one of my all-time favorite Thanksgiving. After all, laughter, conversation, delicious self-serve meal, and movie, what more can a person ask for?

14 thoughts on “The Best Thanksgiving”