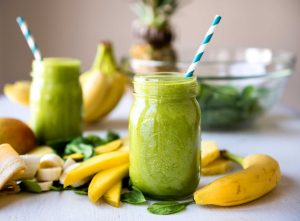 Good Sunday morning! Thank you for joining me. How has your week been?

Since I’m back at home, let’s mix some other drinks other than tea, shall we? What would you like? Coffee? I’ll have a green smoothie made from veggies, banana, and frozen fruit. I have to detox, give my intestines a cleanse from all that delicious yet unhealthy foods I had in China.

If we were having drinks, I would tell you this will be my fifth day back in the U.S and I’m still adjusting. No, not because of the time difference. It’s the fact I’m unemployed and who knows when I’ll find a new job or one I actually like.

I used to crave staying home on a weekday when I was working but now, I feel bad because everyday I stay at home, my mom’s out there earning a living, helping me pay my mortgage and bills. I feel like it should be me doing that. I just hope I find a job soon. I don’t like depending on my mom for money because sooner or later, this will backfire. I don’t know how, I just know it will.

If we were having drinks, I would tell you I had a semi-pleasant flight back to the U.S. It was nothing big, just a spoiled little girl sitting in the seat behind me occasionally stomping her feet against the back of my seat, disrupting my sleep. Her parents tried to control her but they seemed helpless against her tantrums. Therefore, I ended up getting only maybe 3 hours of sleep on that 12-hour flight.

I feel bad for the gentleman sitting a seat away because he had to put up with the little girl’s crying too. Once in a while, I would catch a glimpse of him stare unblinkingly at the screen and wondered whether he’s asleep or watching the movie.

Even though I am unemployed (for now), I am glad to be back home, at least there’s such thing as a furnace here to keep me warm as to the freezing heater-less China. It was so cold during my last days in China that I drank ginger tea and ate ginger cakes to stay warm. I don’t think I’ve ever had so much ginger in my life.

If we were having drinks, I would thank you for joining me this weekend. I would say I am glad I didn’t gain a pound during my two weeks in China. Whew! Before we say goodbye and until next weekend, I would like to show you some of the foods I ate this time in China. 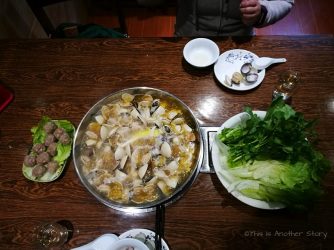 Pot-style Rice (good to eat on a cold day)