I used to be a teacher’s pet with my group of so-call friends back in 6th and 7th grade. Almost everyday at lunch, we’d go chat with our teacher like friends. Then after school, we’d go again to help clean the boards and tidy up the classroom. But then we sort of went our separate ways during 8th grade. 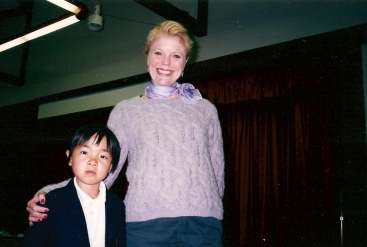 I started 5th grade shortly after I arrived in the United States and because I didn’t understand English, I was placed in the Newcomer’s program along with all the other Newcomers. There were about 20 students and only one spoke Chinese while the others spoke Spanish. The Chinese-speaking kid didn’t really like me though, the last time we saw each other was three years ago and he didn’t even talk to me, oh well. I had to learn English anyway.

Anyway, I spent the entire spring semester of 5th grade under the guidance of Mrs. Estes, the sole teacher of the Newcomer’s program and one of the many teacher that had actually made an impact on me.

For one, I learned to speak, read, and write English, didn’t I?

I remember I used to dread school before I went to school in the U.S. because in China, even in elementary school, it’s all about studying, memorizing curriculum for exams and doing lots and lots of homework, all to pass the end of year exams. I didn’t know fun or there was even such thing as awards and trophies.

I mean I do but it’s not like they would hand them to people like me. Mrs. Estes actually made learning fun. We often played games, watched movies, and have parties in class. On some afternoons, I even got to teach some kindergartners math.

Those were some good times. Oh and I got surprised by a trophy at the end of the semester. I remember I was in complete shock when my name was called for “Math Excellence” trophy.

Even though I still continue to try to improve my English daily, I think the biggest impact Mrs. Estes had in my life is that she had shown that learning doesn’t have to be dull, that learning can be fun.